The American Eagle investment coin is an object for a profitable investment of money. Over time, it has become more popular, its cost is growing. The denomination of the cash sign is $50, but the real price is much higher. That is why the coin attracts beginners and experienced investors - everyone who wants to invest money for a long time. 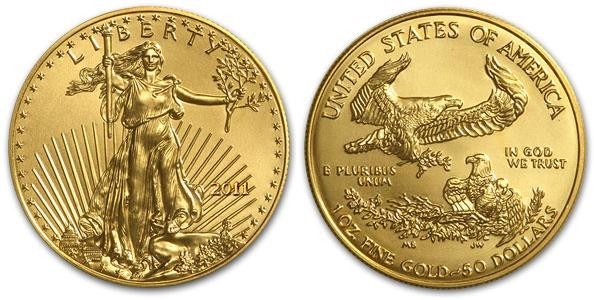 The first "American Eagle" was released in 1986. Today, the coin comes in several variants: 1/10, 1/4, 1/2 and one ounce. The amount of gold in it is guaranteed by the US government, the 1985 law on weight gold coins. The same law provides that all banknotes must be made of local gold.

The proposed investment coin is one of the most popular worldwide. Her sample is 91.67%, equivalent to 22 carats. Copper (5.33%) and silver (3%) are used as auxiliary elements. All coins are a legal means of payment in the United States. Throughout history, their designs have remained the same. The US government is careful to ensure that each instance meets high technological characteristics and maintains the liquidity of coins.

The proposed coin is minted annually. As a rule, its circulation is 1 million. However, there are limited series. For example, in 1993, 1994-1996, 200 thousand coins were issued, and in 2001 and 2007 - 140 thousand. In order to improve security, all banknotes have special protection. First of all, it manifests itself in the high quality of drawing an image that is almost impossible to fake.

Description of the coin

On the obverse of the proposed coin is a statue of the Liberty of Augustus Saint-Gaudin. She has a burning torch in one hand and an olive branch in the other, which is a symbol of peace. The statue itself is located against the background of a stylized sun, and along its rim are stars. At the top is Liberty, which translates to "freedom."

"American Eagle" was released in 1986 and immediately gained popularity. From the very beginning, it was the official means of payment of the country. Coins in denominations of 5, 10, 25 and 50 dollars are published. These figures are purely symbolic. The real value of coins is much greater. It is determined by the sample, as well as the daily wholesale price of gold on commodity exchanges.

The U.S. Mint offers two variations of the "American Golden Eagle." The first coins come as Brilliant Uncirculated, which is also called non-wear. They are released in the state of Philadelphia. Collectible specimens that are produced at West Point are also published. These banknotes above the year of exit have a mint sign (W).

A gold investment coin is a good investment of free funds. Unlike stocks and other ways of investing, it is more reliable and stable. Its value is slowly but confidently growing, due to which you do not lose money, but increase it. The main condition for the subsequent sale of the coin is its high quality, as well as the safety of the case in which it is located.

Investment coins can be bought for yourself or as a gift. The original high-sample product will appeal to everyone without exception. In the future, it can be resold profitably or kept as part of the collection.

In our online store you will find original gold coins. All of them are presented in excellent quality and have special capsules that protect them from external influence. You can buy them in a couple of clicks. You can request additional information by mail mail@kalita.gold or through the communication form on the site. Our experts will provide additional information, help you choose a gold coin that meets your goals.

Ваш браузер устарел рекомендуем обновить его до последней версии
или использовать другой более современный.
The club discount is given for a one-time or gradual purchase of 10 ounces of gold.
Data Protection Information
By clicking on the "Accept" button, you consent at any time to the use of KALITA.GOLD cookies, third parties and similar methods to optimize the website and its correct operation, as well as to display ads based on interests. Also, other methods used to conveniently customize the website, create anonymous statistics, link information about your use of this website and our online ads to order transaction data and other customer contacts, or to display personalized marketing content on this website and elsewhere. Click "Privacy Policy" to learn more about how we use your data, who our partners are, what you consent to, and your right to recall at any time. By clicking "Accept," you agree to the use of these technologies and the mentioned processing purposes. You can decline your consent here or revoke it at any time in your privacy policy.
Accept